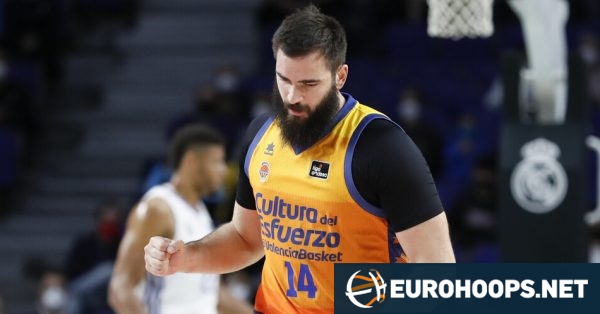 After failing to build on a 13-point advantage, Valencia outlasted Real Madrid to claim the win, 94-93, at WiZink Center Sunday.

Jasiel Rivero picked up a knee injury scoring the go-ahead bucket and earning a foul with 1:08 remaining in the exciting contest. The Cuban center exited but ended up sharing a team-high 16 points with Klemen Prepelic. Xabier Lopez-Arostegui registered seven of his 11 points in the fourth quarter. Captain Bojan Dubljevic added 11 more points aiding the Oranges up to 12-6.

The team led by Pablo Laso dropped to 16-4 with its third loss in a row at the domestic level. Sergio Llull packing a game-high 17 points behind 5/10 three-pointers did not snap the skid. Rudy Fernandez finished with 16 points. Adam Hanga, Gabriel Deck, and Jeffery Taylor remained out.

Alec Peters went for 16 points, seven assists, and six rebounds as his side dropped to 10-9. Steven Enoch and Rokas Giedraitis had 14 and 13 points, respectively, in the losing effort.

Earlier, FC Barcelona went up to 14-3 after defeating Monbus Obradoiro, 83-67.