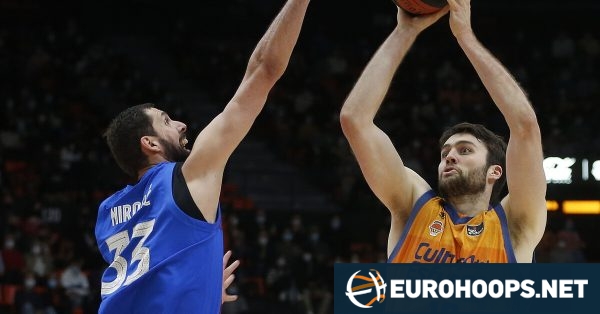 Valencia had a strong performance in the second half to beat Barcelona 86 – 76 in a game for Round 18 of the Spanish ACB League. The Taronja have now swept the Blaugrana in the regular season since they had also won in Palau during the first leg.

Mike Tobey had a team-high 17 points (11 in the final period) plus six rebounds and Nenad Dimitrijevic posted 16 points plus seven assists to lead an overall well-balanced Valencia offense. Jasiel Rivero added 14 points, Jaime Pradilla scored 11 for a Valencia squad that outrebounded Barca 42 – 24, getting 10 more boards (18 – 8) on the offensive end.

Nikola Mirotic (14 points, five rebounds), Brandon Davies (13 points) and Dante Exumn (11 points) scored in double figures for Barca. The visiting side led 49 – 54 in the mid of the third period but was unable to keep up with or stop their opponents’ scoring efficiency in the last 15 minutes.

Valencia took a 64 – 61 advantage by the end of the third quarter and opened the final period with a 9 – 1 run to go up by double figures. Barca didn’t even manage to approach by a shooting distance in the rest of the match.

The post Valencia triumphant over Barcelona appeared first on .

Breogán dispenses with Diego Epifanio, the coach of the ace …

The ‘Partizán’ of Fuenlabrada knocks down Obradoiro and glimpses the …

Real Madrid explodes due to the controversial lack of Poirier that…