FC Bayern Munich added plenty of experience with the signing of versatile forward DeShaun Thomas, which the club announced Tuesday. Thomas (2.01 meters, 29 years old) last played with Toyota Alvark Tokyo where he posted 16.6 points, 4.7 rebounds and 1.7 assists in the Japanese League last season. Thomas is a veteran of six Turkish Airlines EuroLeague seasons. He has 161 appearances in the competition, during which he has amassed 1,596 points (9.9 ppg.) and 493 rebounds (3.1 rpg.).

“The last season in Japan was an adventure, but after that, I quickly had the EuroLeague again in my head, it was a must for me,” Thomas said. “Bayern is now a very good opportunity for me. They were one shot away from the Final Four last season and I like that I will again have close battles in the EuroLeague with a strong organization. I know I have a lot of experience, but above all, I am a team guy who is a hard worker and who wants to win. I can score, but I fight just as hard around the rebound and in defense. I know that Coach Trinchieri lets a lot of switches – and I do think that goes very well with my passion and my will.”

Thomas last played in the EuroLeague in the 2019-20 season with Panathinaikos OPAP Athens. It was his second of two seasons there, and he averaged a career-high 13.9 points over 28 appearances. In his two seasons with Panathinaikos, Thomas helped the Greens win back-to-back Greek League plus the Greek Cup in 2019. Thomas spent a season apiece with JSF Nanterre of France, FC Barcelona of Spain, Anadolu Efes Istanbul of Turkey and Maccabi FOX Tel Aviv of Israel. In that time, Thomas won the Israeli championship with Maccabi and the French Cup with Nanterre. He also played one season in the D-League for Austin. 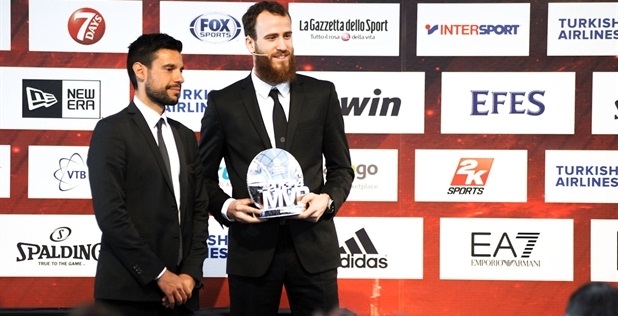 Calathes achieved an all-around first in 2020-21

This Week’s Games: It’s the Playoffs!