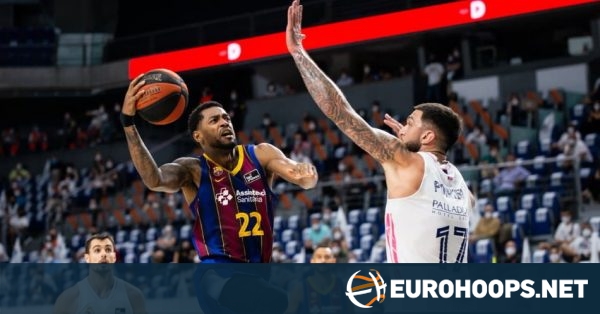 FC Barcelona took the lead for the first time in the third quarter and refused to look back claiming the win, 89-75, against Real Madrid in Game 1 of the ACB Playoffs Finals.

Cory Higgins made 14 of his 25 points in the key third quarter. He was responsible for ten points in the 17-0 run turning a 7-point deficit into a double-digit cushion.

Brandon Davies ended up with 13 points and Nick Calathes went for 12 points. Pau Gasol paired his eight points with eight rebounds displaying the required strength in the paint to keep Barca close in the first half.

Pablo Laso’s side jumped to a 9-0 lead in the best-of-three series opener and held on up until the changing point of Friday’s Clasico held at WiZink Center.

Game 2 follows at the reverse venue on Tuesday with Barcelona securing the opportunity to be crowned champion of Spain. Game 3, if necessary, will return and conclude the series at Madrid on Thursday.

The post Cory Higgins sends Barcelona to the 1-0 lead over Real Madrid appeared first on .

The Palau is filled with legends to celebrate its half century