The 2021/22 squad of CD Becedo continues to be outlined. David Melero becomes the third reinforcement, after Diego Ibarlucea and James Agyeman, added to the renewals of Ismael Diarrá, Jorge Gil and Pedro de Haro, thus being the sixth player who will be part of the rotation that will be available to him. Chisco Marañón.

A native of Fuensanta de Martos, a municipality in the province of Jaén, he is a versatile player whose position is that of forward, but who can help in the ‘4’ and even as a guard in certain phases of the matches. He defines himself as “a player who contributes on both sides of the court, more penetrator than shooter”. He is capable of taking many fouls and helps in the rebound both defensively and offensively. He also performs well on the counterattack. He considers himself “a team player and values ??that there is a good atmosphere because it is reflected later on the court.”

David Melero has developed his entire formative stage and the beginnings of his professional career in the team of his hometown, the Martos Basketball Club. He went through all the lower categories until he reached senior. In the 2017/18 season he managed to be promoted to the EBA League and until the 2019/20 campaign he was in the Jaen club. In those two seasons he had a role as the first sword, having very outstanding numbers. In the first of them, in 2018/19 he averaged 15.8 points, 4.6 rebounds and a PIR of 15.7 and in 2019/20, until the COVID-19 pandemic forced to cancel the competition, his numbers they were quite similar. 14 points, 5.3 rebounds and an average PIR of 15.6 in each of the games.

In the summer of 2020 he changed his scene for the first time to stop in Palencia, in the Inmapa Filipenses Group, rival of CD Becedo last season. He signed a card of 18.8 points, 8.2 rebounds and a total PIR of 24.3, being the fifth highest scorer of the AB subgroup of Liga EBA and the second most valued, only behind Harol Cazorla, who in his 12 games wearing our jersey last season, added a total of 26.1 valuation digits per game.

The coach, Chisco Marañón, puts the magnifying glass on David Melero: “The previous season was for me one of the players who most revolutionized this league and for me it was a personal bet to be able to capture him for CD Becedo. To talk about David is to talk about a highly versatile player, but above all we are talking about an intense player, who helps in all facets of the game. Defense, attack, rebound and that leaves the skin in each action. He is a player who is focused the minutes he is on the court and who contributes his game and knowing how to be on the court. We hope David does the same job as always or better yet, we need him to fit in with our style and make him feel important within this squad. I’m sure it will be ”. 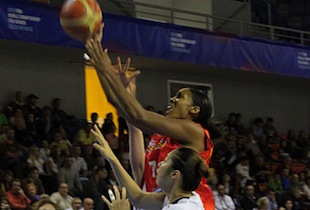