ISTANBUL (Turkey) – The EuroLeague Women Final Four is about to drop and our expert panel has been assembled to tell us how they think things will go down at the showpiece event in Istanbul.

Alysha Clark is a multiple WNBA champion who has firmly established herself as a leading EuroLeague Women performer with LDLC ASVEL Feminin and CCC Polkowice. Maros Kovacik is a playcaller for the Polish national team and has spent many seasons coaching in EuroLeague Women with Nadezhda, CCC Polkowice and Good Angels Kosice who he led to a historic Semi-Finals spot in 2013.  Meanwhile, Paul Nilsen is flying the flag for the media as FIBA’s global women’s basketball specialist. 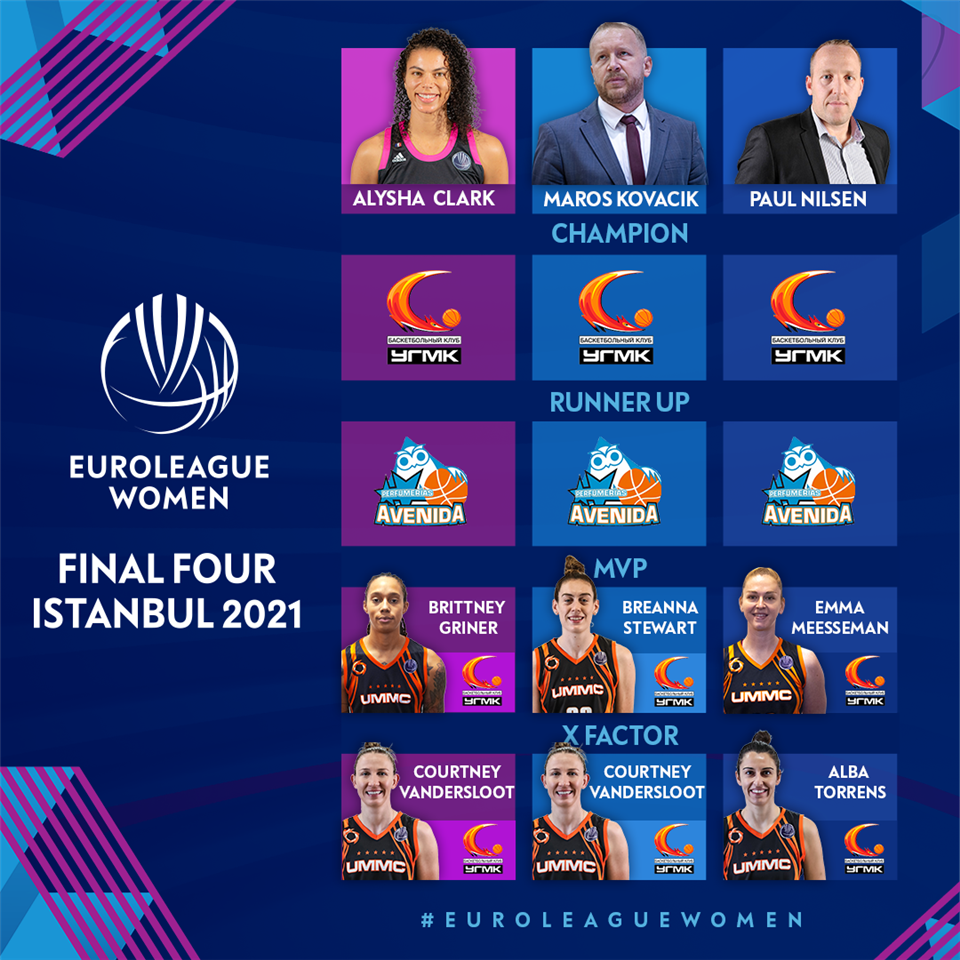 Here is how they answered our hot topics as the countdown to the Final Four continues.

Who will make the Final and why?

Alysha Clark: I have Perfumerias Avenida edging Sopron Basket in this Semi-Finals matchup. Even though Sopron’s big three (Briann January, Gabby Williams and Jelena Brooks) have been playing really well, I think the pace and toughness that Avenida plays with will help them win. Not to mention, Tiffany Hayes and Katie Lou Samuelson have been ballin! I don’t think Tiff has gotten enough credit for how she’s been playing this season. I mean she’s averaging 16 points and 4 rebounds, while shooting 65 percent inside and 46 percent from three! I know that’s going to fuel her for this Semi-Final game.

It’s hard to go against Ekat in these situations because they have so much title experience. Fenerbahce has enough talent to compete, but when the posts of Ekat are scoring 70 percent of their points, that’s going to be a lot for Kiah Stoke and Kia Vaughn to slow down. I also know from personal experience (with Seattle) that when you have Stewie, it’s going to be hard to win against that team and especially when a championship is on the line. 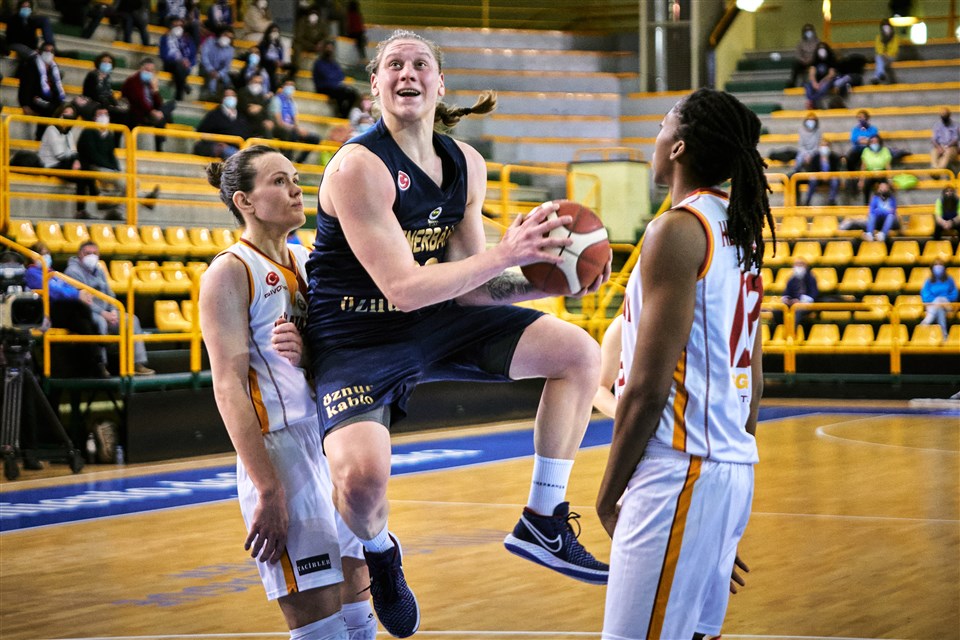 Will the recently crowned EuroLeague Women MVP Alina Iagupova be the game-winner for Fenerbahce Oznur Kablo?

Maros Kovacik:  I don’t like some people saying UMMC and Fener is the real Final. It’s disrespectful to Avenida and Sopron who also deserve to maybe win it all. Fenerbahce have built a really competitive team and especially with the addition of Alina Iagupova. If they share the ball better they can cause a headache for UMMC, but if they don’t, it’s mission impossible. UMMC has to stop or at least minimize the transition game of Fenerbahce which is their big weapon along with three-point shots. How will UMMC cause offensive struggles to Iagupova and what will Fenerbahce’s low-post strategy be to contain Brittney Griner?

In the other Semi-Final, the biggest positive surprise in terms of style of games and results is Sopron Basket – the season underdogs. But they’ve shown in recent seasons they can go this far and even make the Final. For the ‘fairytale’ to continue, they need an extraordinary team performance for victory against Avenida who are such a well-balanced side. Plus, as a recent coach of Sopron, Roberto Iniguez provides a small but important advantage. 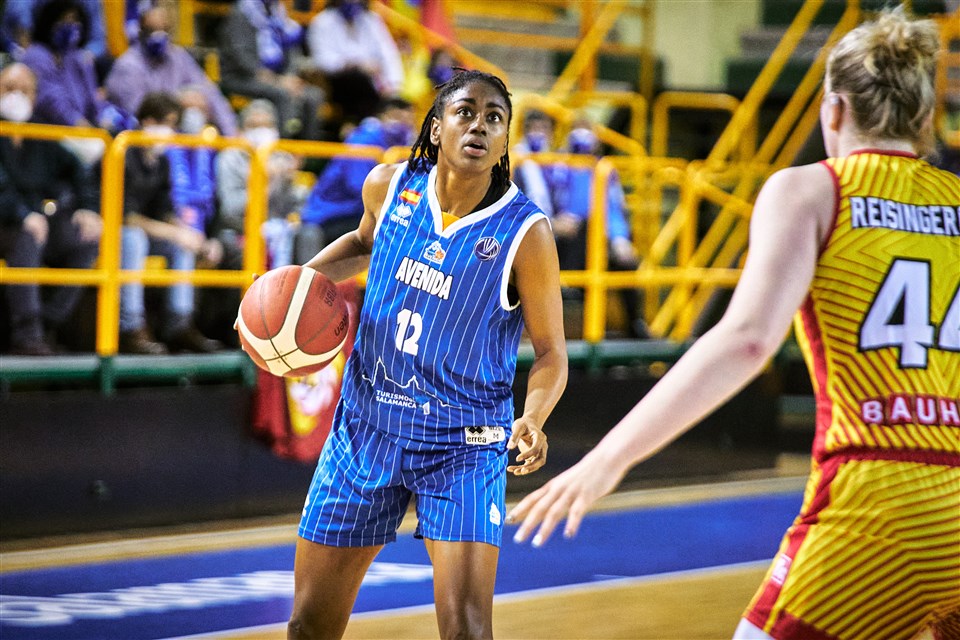 Who will be able to slow down the dangerous and versatile Avenida star, Tiffany Hayes?

Match-ups wise, which Sopron player can guard Tiffany Hayes? Will Maria Cazorla have to stop Gabby Williams? Another important match-up could be Jelena Brooks and Katie Lou Samuelson.  But the key will be Briann January and Zofia Fegyverneky. How will they handle the full-court aggressive defensive pressure of the Avenida guards and still organize Sopron’s frontcourt game? As underdogs, I’d like to see Sopron make the Final as I am sentimental and like fairytales.  But, the smarts of Avenida should see them progress.

Paul Nilsen: I voted David Gaspar for Coach of the Year and just a whisker ahead of Roberto Inigiuez. But I think the latter will mastermind Avenida making the Final. He’s a master, has bags of experience, prepares meticulously and against his former club, will be even more determined – if that’s possible. I also love the depth, options and intensity of Avenida, so they should sneak it.

Fenerbahce team can compete, but their preparation has been ravaged by leading players quarantining due to positive coronavirus tests. It’s a big headache for Victor Lapena. And, if the impressive UMMC coach Miguel Mendez gets his rotations right as usual, he can still wear down Fenerbahce even if things are not flowing smoothly for his team.

Who are the ‘X-Factor’ players for each club? 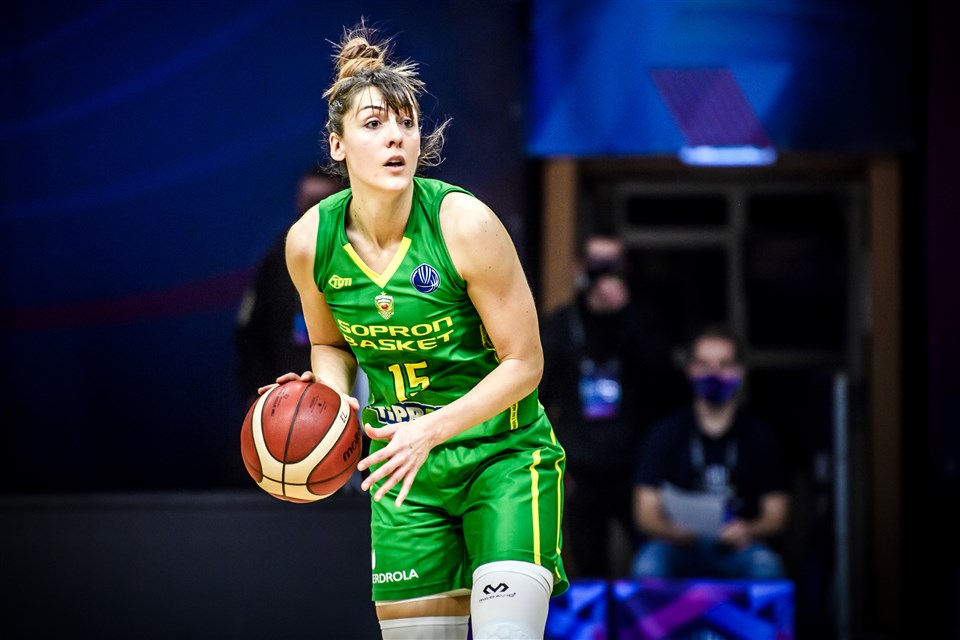 Alysha Clark: Tina Krajisnik always plays well for Sopron and they’re tough to beat. She spaces the floor for them, finishes well around the rim and provides an inside defensive presence which will be needed if Bella Alarie and Emese Hof come ready. Talking of which, I know Bella came late, but when Avenida has a big that is finishing well inside, it opens the floor for their guards to be able to create and score. And if you give Tiffany Hayes space to score or Silvia Dominguez space to create it’s going to be a looong night, so she could be an ‘X-Factor’.

My Fenerbahce pick is Satou Sabally because Ekat is playing Stewie at the 3 and if Satou is playing well, it could be a much more interesting game. She has the size and ability to disrupt on the defensive end from the 3/4/5 positions, but she will also make the Ekat players have to defend because she can create well for herself. We know Satou is more than capable of erupting for 30 and if she does, Ekat may be in for a surprise. Finally, Vandersloot is the head of the snake for UMMC and she’s leading the competition in assists per game. If she isn’t able to create for Ekat (Jaz Thomas is one of the best perimeter defenders in both the WNBA and Europe) then it’ll make it harder for them to flow the way they like to.

Maros Kovacik:  I have my own experience from the Russian League with UMMC and their game is totally different with or without Vandersloot. She is a great pass-first point guard who organizes all the games. It is not about her points, it is about the style of the team game with her. She is an on-court playing coach and I really like to watch her. 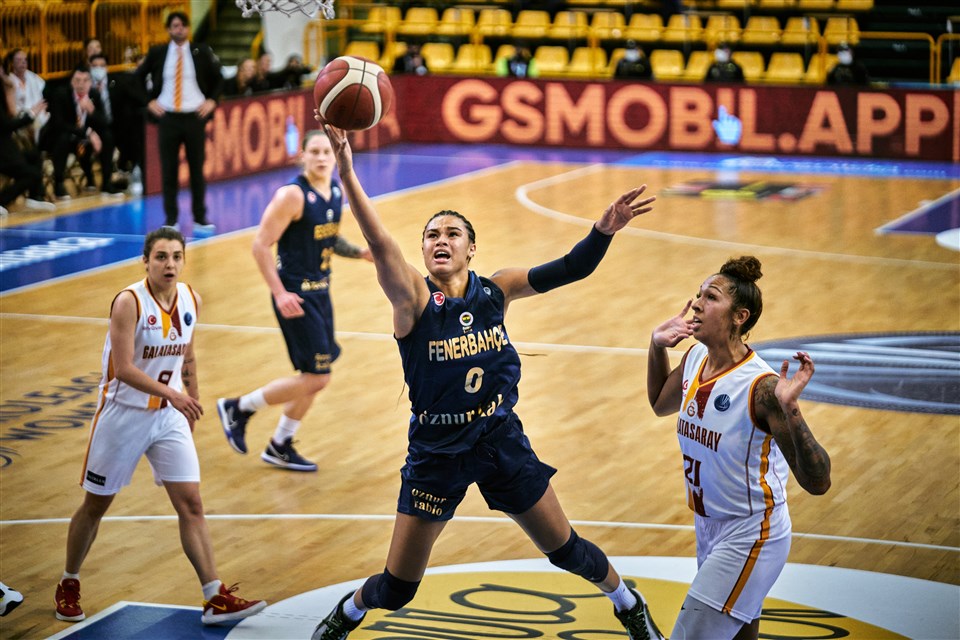 Meanwhile, because back-court players play have been stable for Fenerbahce, if they want to compete and think about beating  UMMC, they need extraordinary individual performances from the likes of Sabally. She’s a very gifted player with a couple of different offensive weapons but is still very young. If she plays her best game, she can help her team a lot, but it will require her best mindset.

For Sopron Basket. I want to stress the team emphasis and not a particular name or player. The point guard roles will be essential for the organization of Sopron’s game. I am sure Katie Lou Samuelson will find a way to be useful for Avenida as she has done so far, but they really need Tiffany Hayes at her best. Her individual contribution on both ends of the court when fully concentrated can be vital for the team’s success.

Paul Nilsen:  Briann January of Sopron Basket is probably going to have to lock down and slow down Avenida’s heartbeat in Silvia Dominguez who uses all her veteran experience to pull the strings. While all eyes have been on Tiffany Hayes, the role of Dominguez should not be overlooked. In terms of an ‘X-Factor’ for Avenida, what  about Karlie Samuelson coming off the bench? It could be tight and if she makes a few shots, she could snap this one open!

I am going for Jasmine Thomas for Fenerbahce as the guard has to do a strong defensive job on Courtney Vandersloot and cut off ‘the head of the UMMC snake’ as Alysha described her. Meanwhile for UMMC, I think Alba Torrens as there’s been a lot of focus on her colleagues, but with almost 5 assists per game, plus her energy, experience, clutch ability, as well as that great smile and attitude, she really helps UMMC flow as a team.

Who will win the EuroLeague Women title and why? 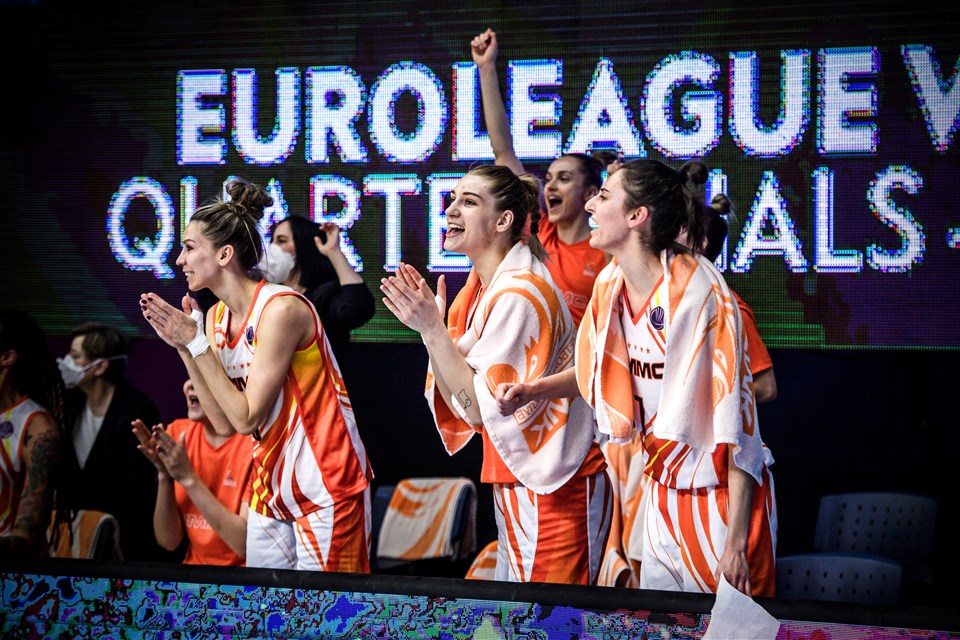 UMMC Ekaterinburg are big favorites to take the 2021 title

Alysha Clark: I have Ekat winning. They just have too many players on roster that can dominate and completely take over a game. It’s hard to go against that.

Maros Kovacik:  There’s only one favorite and it’s UMMC. I don’t want to say other teams don’t have any chance, since any Final Four club could take it. They all have great players, smart coaching staff and well-organized club management – ingredients important for this title. Plus, nothing else counts except the shape and disposition on game night. Yes, some teams have a deeper rotation, but only five players can be on the court to decide the game. I wish all teams good luck but it’s winner takes all time right now!

Paul Nilsen: UMMC have the most talent, a great coach and have done it all before. Frustrated at being denied last season by the pandemic, they should be unstoppable. It will be a massive surprise if they don’t take the silverware.

Who will be the MVP to take their club to the title? 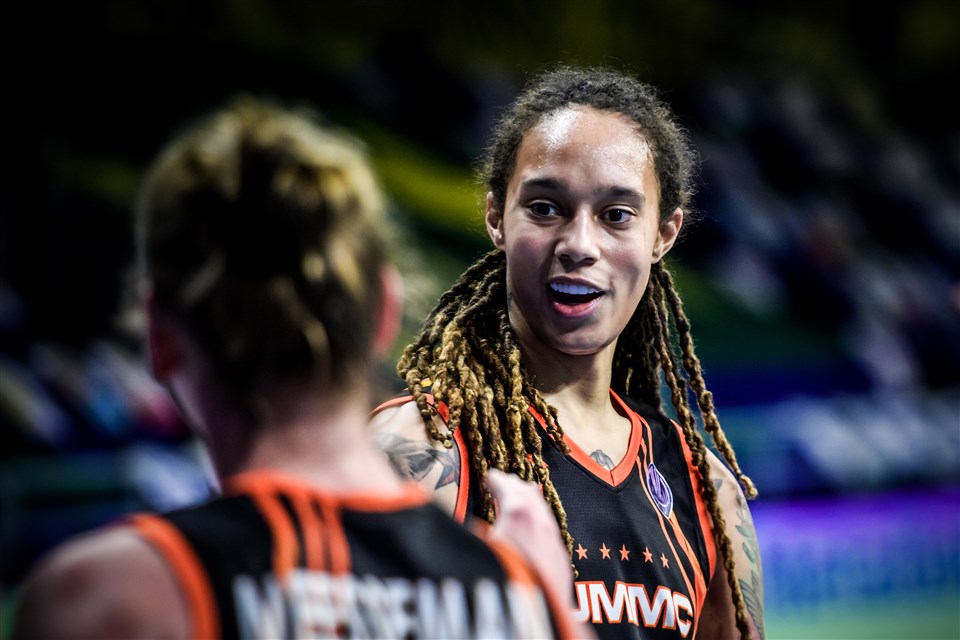 Brittney Griner is an imposing presence in the paint for UMMC

Alysha Clark: I’m going to go with Brittney Griner here. When she’s playing her best she dominates on both ends and there’s just no stopping her.

Maros Kovacik: Breanna Stewart is an amazing player, mentally strong and won almost everything. What I like the most is the style and condition she’s shown coming back after a difficult Achilles injury. She’s such a modern-day player who can occupy multiple positions and contribute in many ways. She can guard all 2-5 players because she is agile and quick enough. She can score in so many ways too, playing well on the ball and especially off the ball – something so important in modern basketball.

Paul Nilsen: Assuming UMMC do it, take your pick! Emma Meesseman has done it before, I love her game and especially her passing skills and smarts. Plus how she goes from do-it-all leader with Belgium to playing a perfectly balanced team role with UMMC.