We would have to go back to the times of the historical Tony smith to find a similar assessment by a player from Burgos on the field of El Plantío. Because very few players in the last decade and a half have been able to come close to emulated numbers this weekend through the 45 points of valuation from the base Ayoze Alonso.

One of those encounters that goes down in the personal history of both the players themselves and their respective teams and that, on this occasion, had the added value of victory against a direct rival in the fight for permanence such as Levitec Huesca (82-75).

The best possible way to look with an extra dose of optimism towards a future to which the Canarian player has pointed directly with 27 points (11/12 TL and 7/10 TC), 7 rebounds, 5 assists, 2 recovery and 11 fouls received.

A whole generator of positive inertia and that is currently one of the main hopes of the Burgos team when it comes to being able to opt for permanence in a category to which they returned last summer with the ambitious desire to be able to recover the place occupied by some years ago.

It had been common to see how Ayoze Alonso (Tizona Univ. Burgos) He led the valuation of his team throughout the season, but it was not until this weekend that the Canarian player was able to achieve his first major award in the category. An award achieved through the 45 valuation goals with which Ayoze has established a new ceiling for a season in which the valuations had skyrocketed in recent days with +39 of AndrisMisters (Melilla Sport Capital) two weeks ago or with the +38 of Álex Hernández (Real Murcia Bto) last weekend.

Focused on just three games, the five members of the day’s ideal quintet did their best so that their respective teams could walk firmly towards their goals.

A statement that began to be based on the base position where the canary Ayoze Alonso (Tizona University of Burgos) It was decisive for his team to achieve a victory that provides oxygen in the fight for permanence. Exactly the same consequence that the role of a Devin Schmidt (Cáceres P. Humanidad) intractable from an outside line that was completed by the presence of a Kristian Kullamae (Palmer Mediterranean Soul) Extremely valuable for the Balearic team to continue dreaming of the playoffs for promotion.

Already in interior positions, the complete performances of Marc Norelia (Liberbank Oviedo) to four and from Michael Carrera (ICG ForçaLleida) at five they were not enough at the time of being able to raise a new triumph to the locker of their teams. Because of this the most prominent men of an outside line were in charge that, on this occasion, ended up marking the passage of the day. 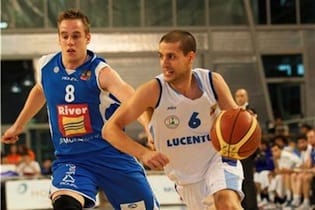 The Sur Aspasia Clinic presents the campaign: ‘We return to this …

TV: The #FinalLFEndesa seeks a champion in a weekend of …