With the Regular League facing its final stretch, the protagonists of “The Quiniela de la LEB Oro” They have to spin fine when it comes to launching their predictions given the difficulty of anticipating some of the most decisive matches of the year. A responsibility that falls this week on the figure of the interior Jorge Bilbao (HLA Alicante) who will try to clear up the unknown with a ticket full of victory at home and in which the odd “troll” within their own team tried to sabotage their own match. Incidence solved with mastery by a player who will thus deliver to TAU Castelló Y Covirán Granada the only triumphs at home within a weekend in which the people of Castellón will face the rocky Destination Palencia and in which the Nasrid will receive the leader Breogán River.

And all this without losing sight of some MVPs among which the role of good friends as the base will stand out. Ricardo Úriz (Tizona Univ. Burgos) who, in his words, will be key to the triumph of his team on the track of the ZTE Real Canoe… Will you be correct in your predictions? 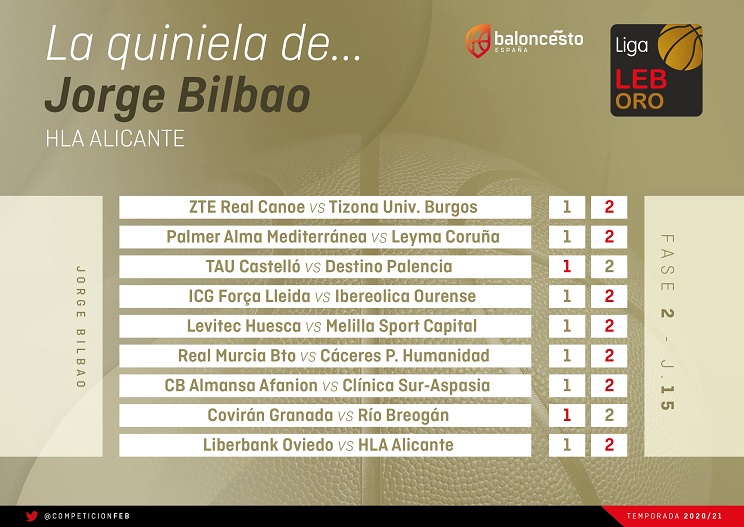 In parallel to the premiere of the second phase, “The Quiniela de la LEB Oro” it happened of round during the last weeks to round off a successful season. And it is that the section has beaten its own record this course with obtaining two plenary sessions throughout its first 18 days of the course. The first of them, the one achieved by Sergi Huguet (Palmer Mediterranean Soul) in the course of Day 11 and, the second, the one signed by Joel Sabaté (TAU Castelló) just four weeks later during Matchday 15.

In the opposite plane, the Argentine base Mateo Díaz (Breogán River), closed during matchday 15 his ticket with a 1/9 that makes him the bottom of the season. A few bets in which the maxim was fulfilled that there is nothing more important than getting the result right just as the outside of the Lugo team did.