Last night FC Barcelona had to battle against the strong defense of CajaSol. Both teams are ranked 1st and 2nd in defensive points. During all of 38 minutes Barca never played comfortable with the pressure of CajaSol’s defense. However, smart play of FC Barcelona star Juan Carlos Navarro who scored a team high 15 points. During the final 6 minutes Barca up by 2 points play smart during the stretch although very difficult. Finally, pulled off a win by 5 points (77-72). Barca will face Power Electronics Valencia who were the favorites struggled also with there 2point win over Asefa Estudiantes. 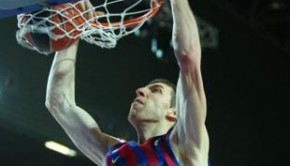