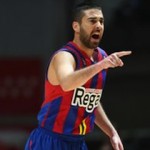 Yet another match up for the two top teams in the ACB: FC Barca and Real Madrid are finalist for the 2011 Copa del Rey on Madrid’s home turf. Last year, Barcelona won the title along with the Euroleague Championships in Paris. The two teams are at it again, who will win?

Barcelona has blown both teams during this cup and Real Madrid has been lucky to slip past their opponents.