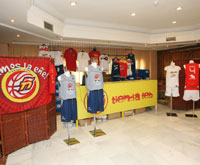 Today the doors of the Federation of Basketball of Spain has opened its doors in the Hotel Bahia Sur with its new line of clothing for the Beijing Olympics 2008. Both womens and mens Spanish basketball teams will represent the country in China this August.

The location of the store is in a hotel located in San Fernando Cadiz, Spain. The hours of the FEB store is from 9-12pm and reopening at 5pm-8pm until August 14th