Viewing News From "fiba player of the year" 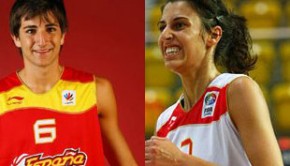 Basketball proves to be improving more than ever in Spain, as top youth players Alba Torrens and Ricky Rubio were

Pau Gasol was clearly voted as FIBA’s Men’s Player of the Year award for 2008. Gasol led his Spanish National

FIBA’s annual Player of the Year voting is now taken place. There are a total of six basketball players from