Add and follow the exciting Cadí La Seu at the head of a qualifying table that they will lead for at least one more week thanks to the solid triumph achieved in front of their fans on a night in which Durán Maquinaria Ensino could not break their positive inertia. All this to stay at the top of a table in which their pursuers will not be able to fail if they want to hunt them down over the next few weeks.

Fourth consecutive win for a Cadí La Seu that remains intractable at the start of the League and will remain at the top of the qualifying table for the next few days. All this thanks to the great work of Bernat Canut’s team on a night in which his superiority in rebounding and the leadership, once again from Irati Etxarri, served to cancel out a Durán Maquinaria Ensino who ended up paying for the great physical effort made to him. along the first stage of competition. A match that Valencia Basket was very aware of during its final stretch, which had previously won with some comfort against Pajariel Bembibre PDM. Because the players of Rubén Burgos dominated from start to finish against a rival who did not have their night in attack and who could not contain Angela Salvadores and Raquel Carrera in defense who marked the passage of the match.

In Madrid, the Kutxabank Araski did not fail to add their third victory of the course in a duel in which the Vitoria women had to work hard to beat a combative Innova TNS Leganés. A team that planted battle throughout the match, but could not contain the great performance of a Katarina Zec who was intractable throughout the 40 minutes. Thus came one of the two Basque triumphs of a night in which the IDK Euskotren signed their best match so far this year to prevail, before the Teledeporte cameras, a Movistar Estudiantes who could not find his best version despite the constant comeback attempts. The night was completed from La Paterna where Baxi Ferrol achieved a more than valuable victory, against a direct rival for permanence and after having overcome a score of points from a disadvantage. A whole team effort that led Lino López’s women to reverse their luck with the passing of the minutes.

Already on Sunday morning, Casademont Zaragoza did not fail in a complicated start to Tenerife and in which Carlos Cantero’s players had to work hard to be able to beat their rival. Because Claudio García’s team sold a defeat that was forged over the good match of an intractable Sierra Calhoun. Although the big surprise came in the afternoon shift with the Campus Promete surprising the Spar Girona in the return of Laia Flores to Logroño. A game in which the La Rioja women were able to sign a complete start to the game with which to add some first income very soon that were key in the final outcome of the game.

The day closed from Salamanca with the victory of a Perfumerías Avenida that remains undefeated after canceling the offensive virtues of Lointek Gernika. All but one since Tinara Moore was very solid on both sides of the court without this being enough to stop the great choral game of Roberto Íñiguez’s. 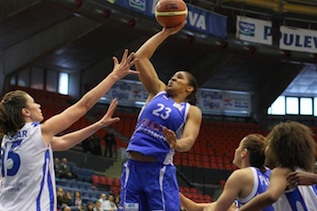 FINAL J.3: Katie Lou Samuelson, the MVP who “dumped” for her team …