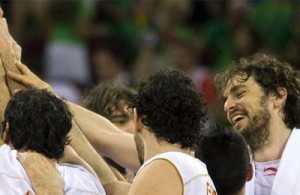 The Spain Mens Basketball National Team have advanced to the semifinals and will face the tough Lithuania Team. It has been 24 years since Spain has advanced to the medal games and they hope to do it August 22nd. Spain started the game with tough defense and it caused a lot of trouble for Croatia. Pau Gasol played big once again for Spain with 20pts and 10 rebounds. Felipe Lopez an undersized forward has been playing well for Spain as he scored 13pts.