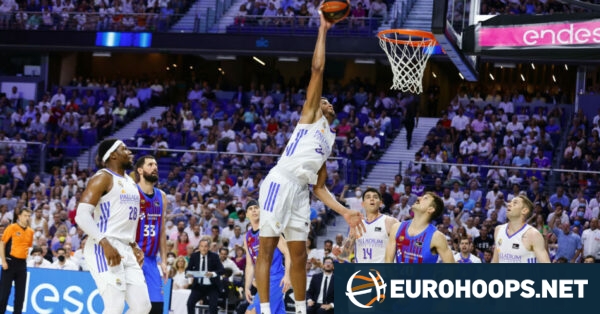 From a double-digit lead in the first half to a back-and-forth battle, Real Madrid topped FC Barcelona, 81-74, and won the Liga Endesa Playoffs Sunday.

Finals MVP Walter Tavares posted a 25-point, 13-rebound double-double dominating Game 4 of the best-of-five series. Packing eight points in the first quarter set the pace but buckets kept coming after the early 14-point lead went to waste. At the end of the 2021-22 campaign, he matched his season-high 25 points set in an earlier battle versus Barca in the Turkish Airlines EuroLeague Regular Season.

Fabien Causeur added 17 points, including eight in the fourth quarter repelling the threat of defeat. A late triple banked in by the French guard signed the win and celebration accordingly.

Nigel Williams-Goss, Anthony Randolph, Thomas Heurtel, and Trey Thompkins were all sidelined. Also, Chus Mateo stepped in once more covering for head coach Pablo Laso, who was in attendance. Behind the support of the crowd in WiZink Center, Madrid ended the Finals at 3-1. The team based in the capital of Spain was crowned league champion for the 36th time in team history. A huge success, especially as the season’s runner-up in both the EuroLeague and Copa del Rey.

On the opposite end, Blaugrana won the 2022 Copa del Rey defeating the Whites in February but lost to its archrival in the EuroLeague Final Four Semifinals after topping the regular-season standings. They ranked first in the ACB Regular Season as well.

Back in the lineup since Game 3, Dante Exum logged 13 points for the team coached by Sarunas Jasikevicius. Nikola Mirotic went for 14 points Nick Calathes scored 12 points. Nigel Hayes-Davis was scratched for a second straight game while Pierre Oriola (back) wrapped up the season staying on the injury list.

Welcome to the Metaverse of the ACB

Hair stand on end: the emotional video of Real Madrid to his leyend …