The squad that has achieved the seventh league of Perfumerías Avenida has shown a high level throughout the 20/21 academic year. It is a group loaded with talent and versatility, with many shooters and great defenders who have managed to execute Roberto Íñiguez’s idea of ??the game to perfection. The commitment of the charro entity this year has been based on youth. Silvia Domínguez has put the experience and the rest, has followed the trail marked by the captain, who has organized a showy and effective game that has led the Salamanca team to become champion of the LF Endesa and to culminate a doublet season having also achieved the Super Cup.

The Gran Canaria escort has completed a magnificent season on its return to Spain, which has enabled it to once again obtain an LF Endesa, but also to receive the call from Lucas Mondelo for the preparation of the Eurobasket and the Olympic Games. In the third clash of the final for the league title, Rodríguez scored three triples in key moments and distributed four assists, which are a sample of the multitude of things that the islander brings on the track. With a valuation of 15 it was the most valued of theirs in this Thursday’s meeting in Würzburg.

The national revelation of this 20/21 course continues to surprise, among many other things, due to his maturity on the track despite the fact that he is 23 years old. The point guard creates a lot of danger with the ball in his hands, as he has a good shot of three and does a lot of damage in his penetrations, both for his ability to finish and to assist inside. In his second campaign at LF Endesa, Cazorla already has three titles: the Copa de la Reina (19/20), the Super Cup (20/21) and this league (20/21). A record that few players have had at their age and that completes the silver medal in the Euroleague. To all her successes, the game director adds that she will be in the first preparation of a great tournament with the Spanish National Team.

Silvia Domínguez handles the blue rudder. Inside the court, set the pace of the game and order each action both in attack and defense. Outside of it, he celebrates each basket and puts forth the passion necessary for the entire team to spread its intensity. The captain has won her sixth league title and except for one that she achieved in the ranks of Ros Casares, all have been in the club of her life, Perfumerías Avenida where she has already played eleven seasons. As in all the Playoffs he has played, his performance has been vital for the team and he has reached an average of 10 valuation credits, the third best figure of his career in finals.

Injuries have prevented us from seeing a one hundred percent Marica Gajic this season. In her first experience in Spain, the one from Montenegro played 13 games that left a good taste in the mouth due to the great abilities that the player has to do damage in the area.

The “killer” of Perfumerías Avenida has fulfilled what its coaching staff has entrusted to it. His privileged physique allows him to score with great ease and becomes a target for fouls, which he usually takes advantage of since he is around 80% correct in free throws. His performance in the second game of this final, at La Fonteta, was key for the Salamanca team to dream of lifting the title. With 12 points, 8 rebounds and 4 fouls received, he went up to 21 valuation credits. The American adds, like Cazorla, three glasses in her period as a azulona.

Andrea Vilaró appeared when his team needed him most on two key occasions. In the semifinals, to sentence Lointek Gernika Bizkaia, and in the first match of this final to complicate victory for Valencia Basket in the first match. Her success in these Playoffs, both in shots of two and in shots of three, is around 60%, a spectacular figure that shows that even if she comes off the bench, she is prepared to give one hundred percent. The Catalan, who has stood out for her defense throughout the campaign, reaps her first league title after nine seasons in the competition.

The young pivot has closed a season of pure learning that allows her to continue developing as one of the most promising interiors on the national scene. Diallo has participated in his first finals and although he has not had many minutes on the track, he belongs to a squad that has fought for both national and international titles and this will make the islander put into practice the knowledge acquired this campaign over the next few years. . With an average of 10 minutes played during the regular stretch of the course, the pivot has been able to maintain the intensity level of her teammates when she has gone out on the track.

The Dutch center is a multipurpose interior. It can be lethal on the rebound but also on 1×1, especially from behind. He understands perfectly with his exteriors and achieves great advantages for his play without the ball. Much of the blame for the good sets at Perfumerías Avenida in the third match of the tie was Hof and his dominance in the area. The highlight of the two campaigns that the player has completed in the charro team has been her unstoppable progression since her debut in the 19/20 Super Cup. In that meeting he played 8 minutes and barely added in the statistics. In this final she has been the starting center of the team and has not dropped below the 8 rating.

Another player who has also progressed in her second adventure in Spain has been Nikolina Milic. After a great year at Lointek Gernika Bizkaia, the Serbian interior has completed a campaign with great personal numbers and has added its first titles. He was crucial in the LF Endesa Super Cup, where he won the MVP of the tournament against his former team. His class under the hoops has been difficult to stop throughout the league and in particular, in the last two games of this final.

Bella Alarie has shown that she does well in difficult scenarios. His performance at La Fonteta last Sunday was superb, but in the decisive match in Salamanca he was spectacular. From the second half, the American pivot together with Hof controlled the rival zone. Alarie found spaces and of the 14 points she scored, 11 were in the last two quarters. He arrived at the beginning of February and in just three months he has joined the group as if he had been part of it the entire campaign.

MVP of the final and best power forward in LF Endesa and in the Euroleague. Katie Lou Samuelson will take time to forget this course at Perfumerías Avenida. The player has found her best version and has closed the year with a great success (50%). Her versatility makes her unstoppable for most rivals and her success from the triple, especially from the corner and the front, makes her a very dangerous player. Samuelson has been the most regular Azulona in this final, has maintained around 10 points in the three games played and has also contributed in the rebounding side.

When a good outside shot is added to a good defense and a go for it attitude, what you find is one of those players that is indispensable for the functioning of a team. Karlie Samuelson complies with these qualities and that is why she has been a regular in the Azulón starting quintet. Samuelson also came to the club in the 19/20 campaign and adds the three titles that Perfumerías Avenida has won in these two seasons.

Haley Gorecki: “I want to help the team win”

Semis – First leg: Karlie Ann, the MVP of the fantastic week of the … 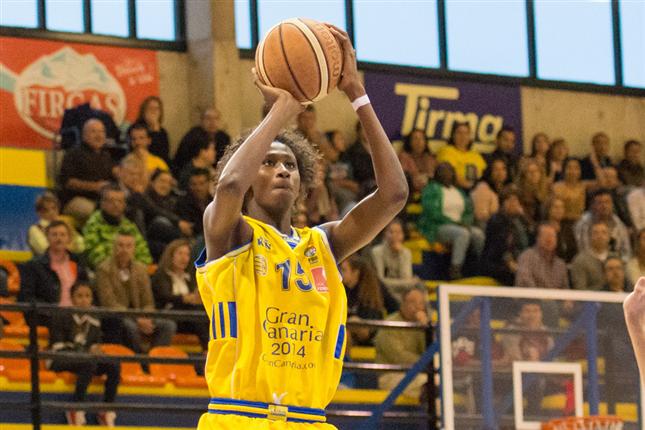