UCAM Murcia’s comeback of character against a diminished Valenc …

ANDhe UCAM Murcia woke up in time to come back from a game that seemed lost after a great first half of Valencia Basket. Those of Sito Alonso, who raised their physical level to exhaust the depleted taronja team, had Isaiah Taylor (13) and Chris Czerapowicz (13) as the protagonists of a tremendous comeback. In addition, with the help of James Webb III (17), they brought down the couple Bojan Dubljevic (22) – Victor Claver (26) (86-91).

From the first quarter, Bojan Dubljevic began to push his team forward. The taronja captain led a 9-2 partial start and began to become a toothache for the UCAM Murcia defense. In addition, Neno Dimitrijevic raised the Valencian offensive game several speeds, although the differential part was in defense.

Sito Alonso’s men were not able to find comfortable pitches and offensive fluidity. Only the work under Augusto Lima’s boards allowed them to be in the game. And it is that the offensive rebounds were one of the main sustenance of the Murcians, who with the changes raised their physical level to try to drown Valencia Basket (20-15).

The cards were clear: UCAM Murcia had to push back to wear down Valencia Basket and the taronja, try to play fast to prevent attacks from being too long. And the game was won by the local team. This time, with a partial of 12-2. Between the failures of UCAM, the defensive work and the success of Dubljevic, Valencia Basket found an advantage of up to 17 points. On the court it seemed that UCAM had delivered the game too early, but their good first-half finish gave them hope (42-31).

In fact, he broke the psychological barrier of 10 points as soon as the second half started with a basket from Isaiah Taylor, who assumed the role of leader. With Taylor directing, UCAM involved their entire quintet to get just 2 points behind. Now they did enter the shots of Thad McFadden and James Webb III. And despite the fact that Víctor Claver and Dubljevic returned the +10 to Fonteta, the attitude and the success of UCAM Murcia had changed and the game, too (65-60).

So much so that UCAM confirmed their comeback with Chris Czerapowicz’s 3s and Webb III’s points. With just under 7 minutes to play, Sito Alonso’s men had transferred their doubts to a disconnected Valencia Basket with foul problems. The difference only made it increase in favor of a UCAM (+9) full of confidence and which now did get even the most complicated shots. For example, a triple by Czerapowicz in the corner and on the horn with Louis Labeyrie on top.

Despite Martin Hermannsson’s three consecutive triples, which led his team to just 2 points, nothing and no one could come down from the cloud to a UCAM Murcia that returned all the blows. The triumph, more than worked, was already decided (86-91).

Referees: Cortés, Serrano and Sánchez Mohedas. They eliminated the local Puerto (m.33) and the visitor Bellas (m.39) due to personal fouls.

Incidents: match corresponding to the third day of the regular phase of the Endesa League before 3,100 spectators.

“With Laso, the shares of the bases of Real Madrid are traded … 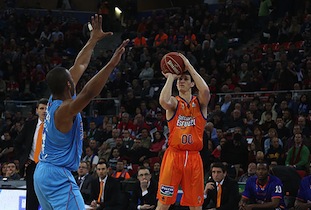