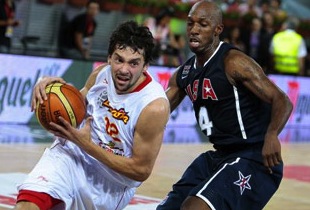 Team USA started the game on fire and much better team play than yesterday’s performance against Lithuania. Spain started slow with a lot of missed shots and poor shooting percentages from the outside. The first half was competitive by both teams but Team USA lead at the half 45-33. Great performances by duo Kevin Durant and Derrick Rose helped Team USA create a nice lead at the half.

Navarro and Rubio have showed their quality and Gasol down low it was hard to stop Spain after the 3rd quarter as they eased back into the game. During the 4th quarter Spain stuck in it until the end. Top plays by Navarro, Gasol and Rubio helped them gain the first lead with 2mins left to go in the game. In the end, Team USA up by one 86-85, Spain with possession but an important defensive stop by Kevin Durant gave them the win.