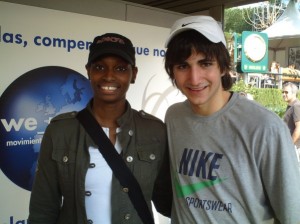 Ricky Rubio was selected as the 5th pick in the 2009 NBA Draft by the Minnesota Timberwolves. The Timberwolves also drafted another point guard along side Rubio. It is a suggestion that perhaps this season Rubio will not play in the NBA but to refine his skills and get ready for next year or years to come. There has been gossip about his current contract with Joventut and possible being traded to Real Madrid.

Whatever the case, he is securing a good spot in the NBA just as Rudy Fernandez did before entering the NBA this season. There are rumors that Rudy is open to coming back to Europe for a more lucrative contract! The Portland Trailblazers adore him, so it will be interesting this month.

No related news yet.